In recent years it is possible to observe a huge increase of fabricated fact-free visual content on social media and disinformation websites pretending to provide alternative “news”. Such content aims to instigate doubt, fear, anger and distrust in the mainstream media or state administration. However, what do you do when disinformation or alternative facts are spread within a country by its national state-funded institution?

Such a thing occurred in Slovakia. Matica Slovenská, the scientific and cultural institution of the Slovak Republic, which is supposed to be upholding Slovak cultural heritage and building national awareness among Slovak citizens living in Slovakia as well as abroad, published a video questioning the development of Slovak nation if particular historical events would not have happened. Those historical events, which were attempted to be justified, were the establishment of the first Slovak State, its collaboration with the Third Reich and deportation of over 75 thousand Slovak citizens to concentration camps and their consequent death.

In the video titled Without March 14, Matica Slovenská attempted to present alternative narratives of historical facts by stating a lot of “what ifs” questions on what would have happened if the first Slovak State, which collaborated with Hitler’s Germany, was not established. The video contains a lot of controversial statements and hypotheses including: “Would have the Slovak nation survived?” or “We, (Matica Slovenská) cannot identify with the interpretation of Slovak history in the years 1918 to 1945, as it was framed and anchored in the process of post-war retribution justice”.

The Slovak State was established in 1939 and was led by the Hlinka's Slovak People's Party. In 1941 it adopted a "Jewish Code" resembling the Nuremberg Laws, which required, among other things, Jews to wear a yellow armband. The party had also its own militia with para-military units, named Hinka’s Guard, which operated against representatives of minorities – Jew, Czechs, Hungarians or the opposition. The Slovak State, led by a Slovak Roman Catholic priest Jozef Tiso, was also one of the countries to agree to deport its Jews as part of the Nazi Final Solution. Thus, many neo-Nazi groups and far-right extremist political parties, perceive and celebrate the representatives of the first Slovak state as Slovak national heroes and fathers of the Slovak state.

In its video Matica Slovenská, as the scientific and cultural institution of the Slovak Republic, inappropriately relativized the responsibility of the first Slovak State and its leading representatives for the destiny and eventually the death of over 75 thousand Slovak citizens. It incorrectly insinuated and interlinked the establishment of the first Slovak State with the establishment of the Slovak resistance movement against the German troops and the attempt to overthrow the collaborationist Slovak political representatives during the WWII, the Slovak National Uprising. The Slovak National Uprising is perceived as an important event in Slovak history when the Slovak citizens unified and protested against foreign occupation. Matica also attempted to relativize collaboration of Slovak politicians with Nazi Germany and its adoption of “Jewish Code” by declaring that “the life of Slovak Jews would not have been any better” than in Poland or Hungary during the WWII.

The reactions of historians and the representatives of the Ministry of education, which funds Matica Slovenská, on the video were quite critical. While, the leading representatives of this cultural and scientific institution argued that this video is not a historical document, but a production “attempting to provide an alternative point of view or state alternative questions” about historical events, it is highly questionable whether a state-funded institution should be doing so. Deportations of Jewish or Roma minority to concentration camps are historical facts that occurred and do not have alternative interpretations.

While Matica Slovenská eventually took down the video from its website and Youtube channel, many started to question its work and activities. For example, in January it published an official statement, in which it was “appalled by the present activities of some civic organizations and media, who think of themselves at the only interpreters of truth, democracy and dignity”. This criticism was aimed at the activists, think-tankers and journalists of so-called “Bratislava’s coffee house”, who are critical of the government, who want more transparency in the public sphere and less corruption and misuse of public funds. While Matica’s statement was the reaction on personal opinions of one famous Slovak actor on both Slovak and foreign politicians, which were in some cases very critical and pejorative, it is possible to observe that Matica Slovenská adopted similar stance and narratives used by pro-Kremlin disinformation outlets. This disinformation outlets are critical of institutions positively depicting Slovak President Andrej Kiska, while they are writing about Vladimir Putin or the Czech President Miloš Zeman in a positive way.

Interestingly, the regular derogatory statements of members of Slovak Parliament and representative of far-right extremist parties do not shock or appal Matica’s representatives. Matica was not even concerned when the member of the Slovak Parliament and representative of extreme-right People`s Party Our Slovakia (LSNS) insinuated on his Facebook page Holocaust denial. In 2016 the members of LSNS far-right extremist party were even invited to and attended district council meetings of Matica Slovenská.

Furthermore, it is quite interesting that it was Matica Slovenská, which in its article in its Slovak National Newspaper provided an explanation and definition of the derogatory term used for civic organizations and activists – “slniečkari” (shiny happy people). The term and such narrative are actively used by various disinformation outlets in Slovakia when reporting on how ridiculous and loopy the claims and arguments of activists, media or civic organizations are. Another fun fact, the author of this article frequently publishes his work and opinions on various disinformation outlets as well as in the newspaper of Matica Slovenská.

At the present time, in which disinformation outlets spread distorting and dismaying stories, one would expect the national scientific and cultural institutions to be the source of truth and the well of historical data. However, the narratives and activities of Matica Slovenská only legitimize the narratives used by the extremists and far-right political parties and disinformation outlets. Therefore, state representatives, in particular the Ministry of the Culture, which provides funding to Matica Slovenská, should reconsider the manner and extent of financial support to such an institution. Slovak police are already investigating Matica Slovenská for its controversial video. 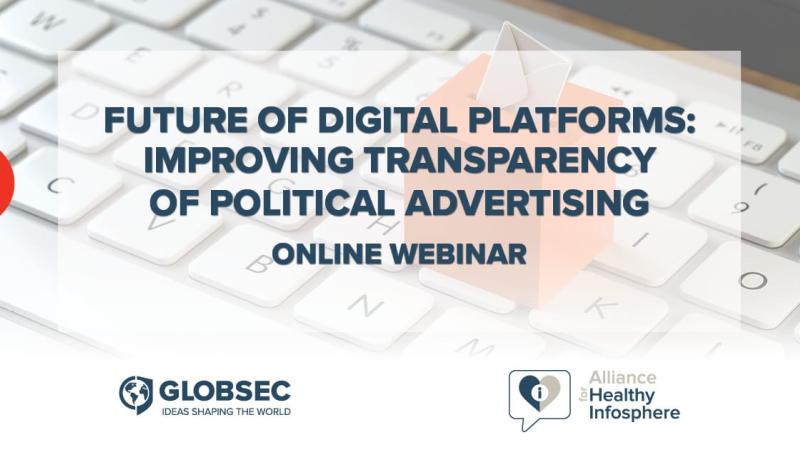 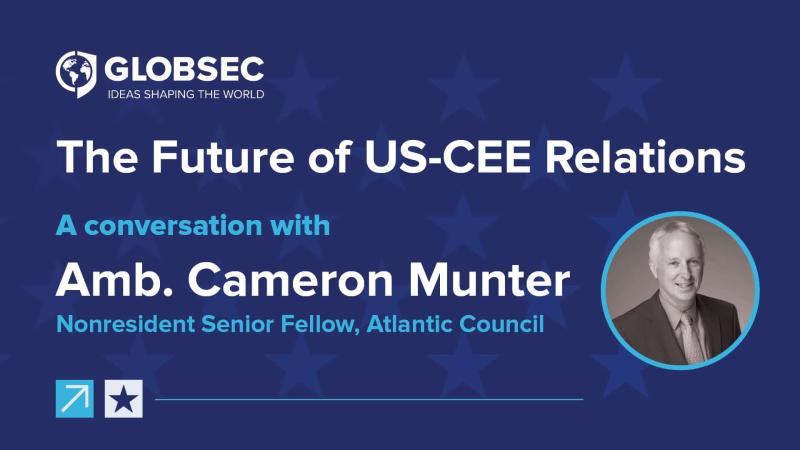 The Future of US-CEE Relations: Conversation with Amb. Cameron Munter 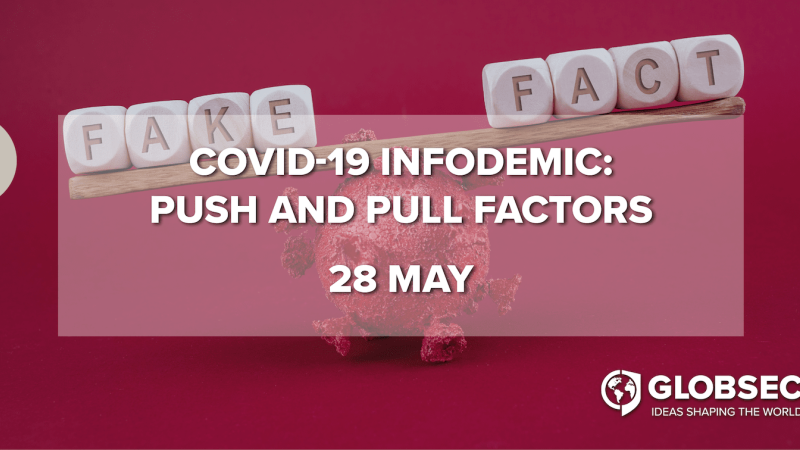 Ideas for Resilient Democracies: Push and Pull Factors of the COVID-19 Infodemic

The EU's upcoming Digital Services Act and issues it seeks to address have also been discussed at our Covid-19 Infodemic webinar: Push &amp; Pull Factor... 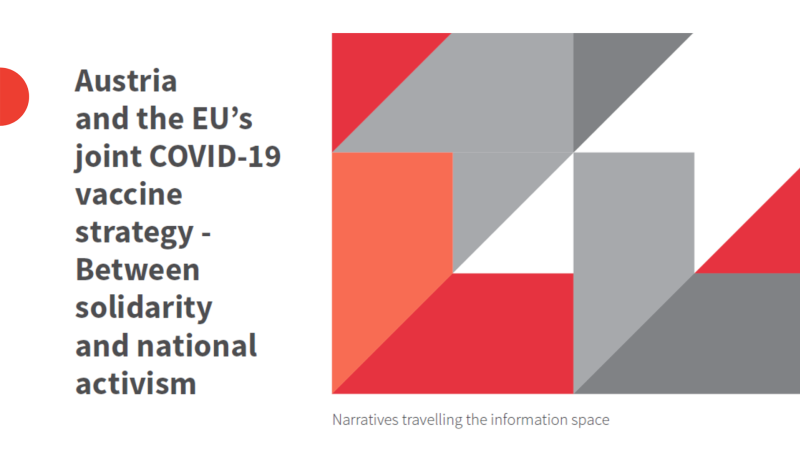 How did the narratives about the EU and the process of getting the vaccines in 2021 change over time in Austria? How did Austrian media contribute to th...