The Belarusian presidential election which was supposed to decide the fate of the “Europe’s last dictator”, Alexander Lukashenko. After the elections were marred by electoral fraud, imprisonments, and repressions, citizens continue with peaceful protests and strikes to demand an accurate and transparent recount.

Similar false narratives about the situation in Belarus are being actively spread in Slovakia by various actors including domestic political representatives including members of far-right or far-left parties. This was also voiced by Slovakia’s former prime minister, Róbert Fico, who on August 16 published a video, in which he compared the public protests in Belarus to a “model” – a game plan to overthrow the government – supposedly applied in Ukraine and partially in Slovakia, which “had utilized the death of the investigative journalist, Ján Kuciak, for the attack against the legitimate government”. Foreign interference in domestic politics is a very popular narrative, which has been systematically spread over the past two years during electoral campaigns in Slovakia.

Unfortunately, such narratives spread also by public representatives resonate in the public. According to GLOBSEC polling, 54% of Slovaks believe in a conspiracy statement that protests against the government in Slovakia, which resulted in changes in the government and other crucial institutions in the country in 2018, were controlled and paid from abroad. Similarly, 49% in Hungary and 56% in the Czech Republic believe the anti-government protests in the past years were orchestrated and financially supported by George Soros.

In a country where currently 193 web portals and over 1,800 Facebook accounts and pages were identified as spreading problematic content, Fico’s video with over 129,000 views and over 4,400 interactions on Facebook received considerable traction.

Over 227 000 unique users were exposed to Róbert Fico’s video, which was further shared by 18 Facebook pages[1], including 5 from Czechia[2] and page Priatelia Ruska v Slovenskej Republike (Friends of Russia in the Slovak Republic). 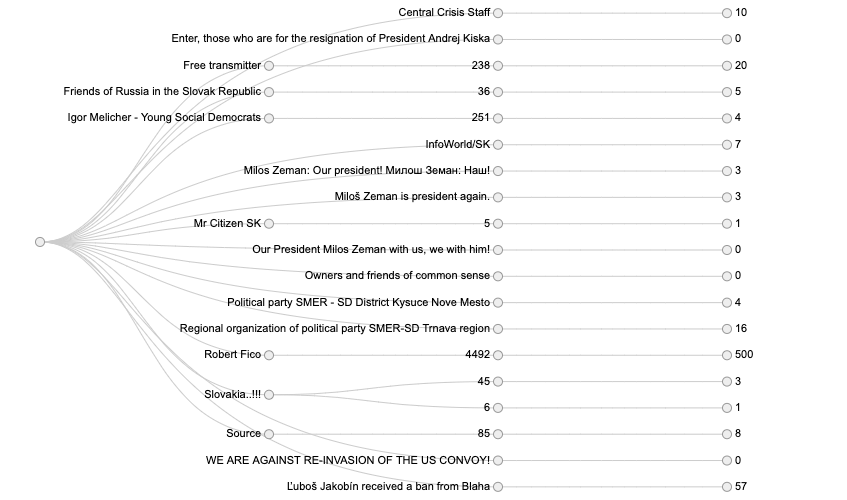 The chart above represents a clustered dendrogram – tree-like diagram representing the distribution of the video. Each FB page is visualized on the horizontal axes in a non-weighted hierarchy followed by a number of interactions it reached and a number of further shares by public FB pages.[3] Names of Facebook pages were translated into English.

The video was shared as a separate post by Fico’s party member, Ľuboš Blaha, who has over 87,093 Facebook followers and in February was the politician with the highest FB reach in Slovakia. Over 58,000 viewers received this video when it was posted within Blaha’s status and was further shared 582 times, including on 6 other Facebook pages.[4] 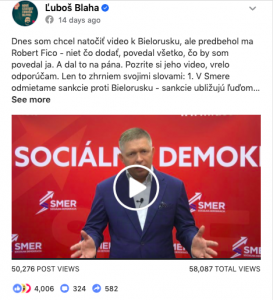 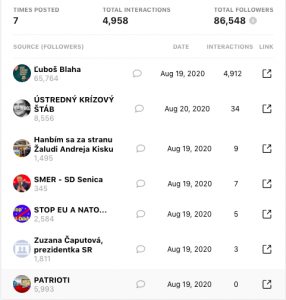 Since disinformation spread about the situation in Belarus continued to be spread in Slovakia, the Minister of Foreign and European Affairs, Ivan Korčok, organised a press conference at the ministry on August 27, at which he debunked disinformation and hoaxes, in particular, about alleged a new Euromaidan revolution being organized by foreign powers; the activation of NATO forces on Belarus’ boarders; that the public protests were being organized by the West and were aimed at establishing a colony out Belarus; that the protesters were being paid to attend civic riots; or that the protesters were fascists.

Countering disinformation and resilience-building against hybrid threats is a priority of the new government, but Korčok is, so far, one of the few public representatives that actively debunked false information. His press conference was live-streamed on Facebook by several online investigative media.[5]

The Facebook pages of these media outlets had more followers (over 650,000) than the Facebook pages that shared Fico’s video and thus could have had a wider reach as the total number of views of their videos combined was just over 83,000 and were shared by an additional 161 Facebook pages.

This shows the superior reach of problematic content online and more the diligent sharing of such content between problematic actors and Facebook pages. As Korčok rightly pointed out in his speech, various actors spreading disinformation and conspiracies in Slovakia do not care about the situation in Belarus.

Civic protests in Belarus, and the consequent debates in the Slovak information space, reflect the aim of various actors in Slovakia to undermine democratic processes and trust in public institutions in Slovakia by discrediting Slovak foreign help to countries or our membership in the EU and NATO.

This article was originally published in NewEurope. 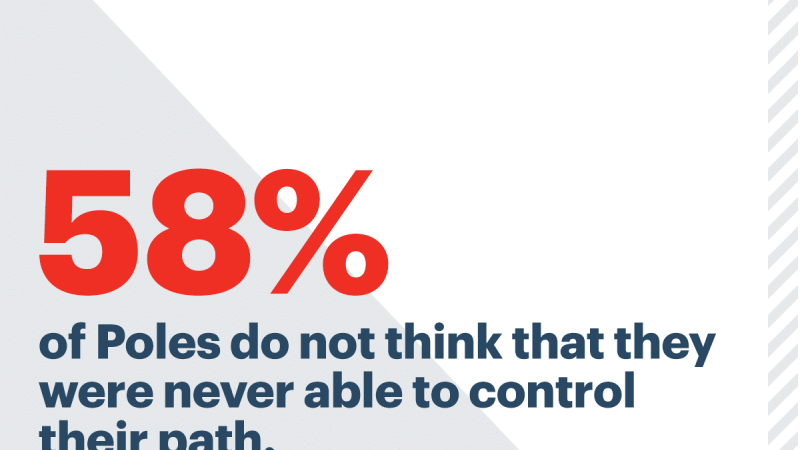 Perceptions of democracy and conspiracy theories in Poland 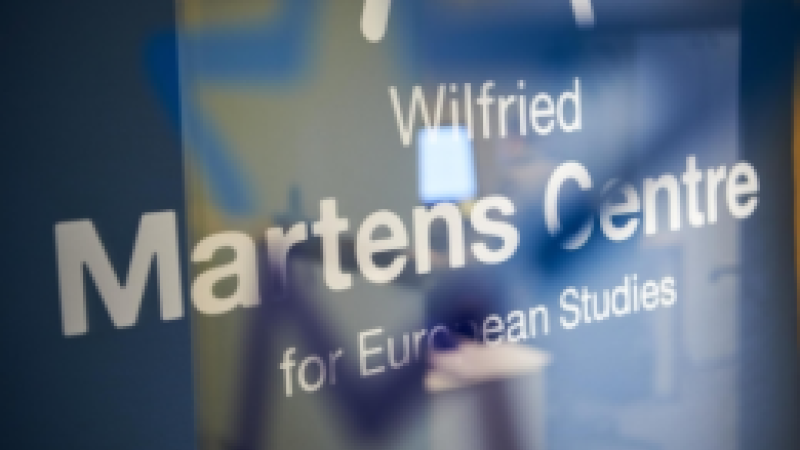 The vulnerability of Central European countries to subversive foreign influence 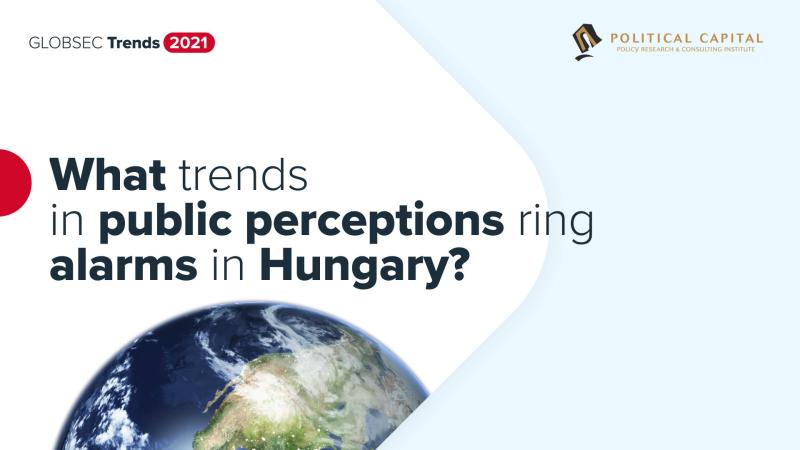 GLOBSEC Trends 2021: Hungary one year into the COVID-19 pandemic 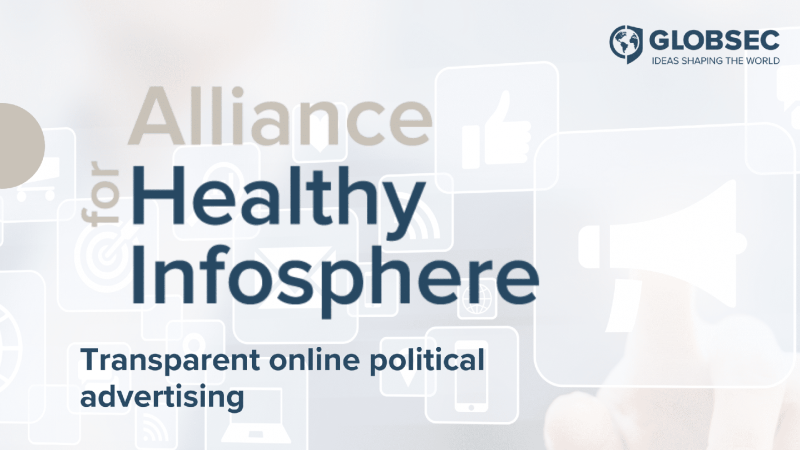