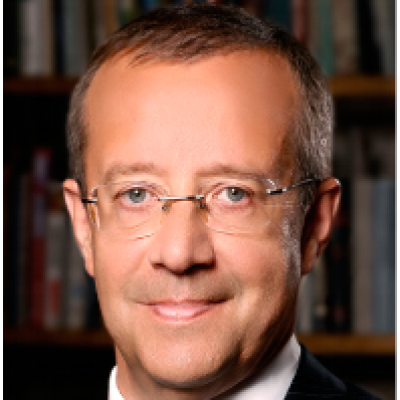 Former President of the Republic of Estonia

President of Estonia, Mr Toomas Hendrik Ilves acquired his education in the United States – he graduated from Columbia University in New York City in 1976 and received his Master’s degree in Psychology from the University of Pennsylvania in 1978.  In 1984 he moved to Europe, to work at the office of Radio Free Europe in Munich, Germany, first as a researcher and foreign policy analyst and later as the Head of the Estonian Desk. From 1993 to 1996 he served in Washington as the Ambassador of the  Republic of Estonia to the USA and Canada. During this time he initiated with education minister Jaak Aaviksoo the Tiger Leap initiative to computerize and connect all Estonian schools online. From 1996 to 1998, he was Minister of Foreign Affairs. After a brief period as Chairman of the North Atlantic Institute in 1998, he was again appointed Minister of Foreign Affairs, serving until 2002.  From 2002 to 2004, Mr Ilves was a Member of the Estonian Parliament; in 2004 he was elected a Member of the European Parliament, where he was vice-president of the Foreign Affairs Committee. As a MEP, he initiated the Baltic Sea Strategy that later was implemented as official regional policy of the European Union. He was elected President of the Republic of Estonia in 2006 and then re-elected for a second term in office in 2011. During his presidency he has been appointed to serve in several high positions in the field of ICT in the European Union. He served as Chairman of the EU Task Force on eHealth from 2011 to 2012, and since November 2012, at the invitation of the European Commission, he became Chairman of the European Cloud Partnership Steering Board.