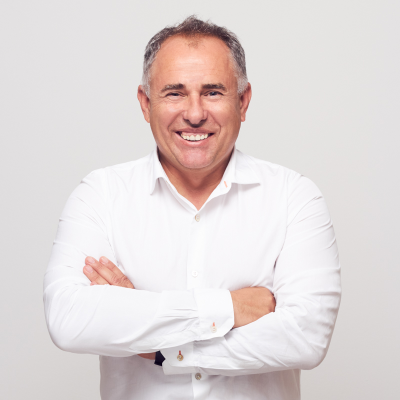 Chairman of the Board, Central Médiacsoport

He graduated from the Faculty of Business and Economics of the University of Pécs. During his studies, he was working for Dresdner Bank and for the Frankfurt Stock Exchange. He joined the Budapest Stock Exchange in 1990 before joining the team of Credit Suisse First Boston (CSFB) in 1991, where he was working in their London and New York offices, and then he served as the head of sales and trading department until 2001.

After 10 years of international and large-scale enterprise carrier, he self-confidentially launched his own investment business. His ambition to undertake opened several doors in the real economy: his initial success as a private investor was the Budapesti Ingatlan Hasznosítási és Fejlesztési Zrt. on the stock exchange, then he joined the Wizz Air success story among the firsts where he was the biggest private shareholder. He established Central Csoport (Central Group) in 2004. The initial factoring, receivables and property management activity, along with financial consulting expanded with venture capital fund management and private equity investments, together with influential international institutional and private investors from the year 2007.

As a turnaround fund, Central Tertius, the company’s first venture capital fund targeted to put large-scale companies into sustainable orbit who were markedly in a difficult situation, in that way its portfolio consisted
of the Hungarian branches of HSBC Bank, Office Depot and Eismann ice cream manufacturer among others. This was followed by Centech Fund in 2008 as part of the Jeremie program, then Conor Fund in 2012 which is a seed fund specialized in startup financing and venture capital investments. The private equity and venture capital fund activity dispose over HUF 13 billion, and it is present in innovative sectors like information technology, biotechnology and film industry through 30 portfolio companies. Central Group expanded with Central Médiacsoport Zrt., one of the biggest independent media companies of Hungary in 2014. This fact ranks it as one of the most important and most developing groups in Hungarian business life. The consolidated revenue of the Central Group was close to HUF 60 billion in 2016 and occupies almost 2,000 employees. Its investment activity is active in the retail, media and real estate investment sectors as well as in the innovative technology sectors which are attractive for the venture fund.

Along with a successful business, social responsibility is highly important for Zoltán Varga. He has established a successful Mathematics foundation in his birth city in Bonyhád, and he is a dedicated supporter of several foundations like Bátor Tábor and Mosoly Alapítvány, moreover, he is the biggest private supporter of Budapest Fesztiválzenekar (Budapest Festival Orchestra). Currently, he is working on a new project for talents in Mathematics, he is building a foundation called Mathematics Empire on his land near Zirc. Actually, his biggest social-focused project is a creative community space and a Central-European cultural and fashion movement called “Societe” located in the very centre of Budapest on more than 4000 sqm.